Since 1961, the Century Club of San Diego has been engaged in charitable efforts to promote the Farmers Insurance Open golf tournament, in addition to the City of San Diego. To date, these endeavors have generated almost $30 million for noble causes in the City.

The Farmers Insurance Open in particular is a key tourist draw, attracting over 50,000 spectators in 2016, with approximately half of those attendees being non-locals, and who in FY 2016 generated a total of 32,282 hotel room nights and $5,660,648 in total room night revenue. Fueled by $190,299 in funding from SDTMD last year, the tournament not only highlights top PGA Tour players but also the beauty of San Diego, showing that there are many reasons to make a trip to San Diego for the Farmers Insurance Open.

The event also enjoyed the following highlights in FY 2016: 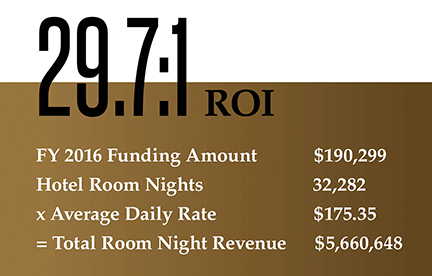